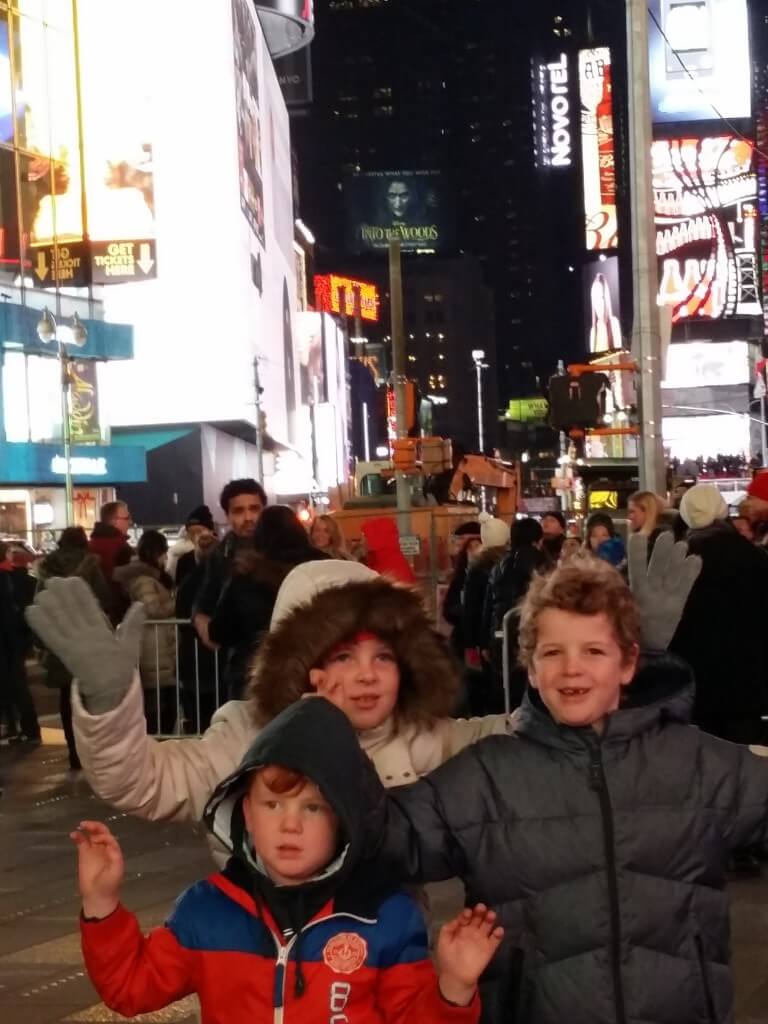 Last December we visited New York City.  It was just before Christmas time, it was cold, Christmassy and delightful.

New York City is super expensive in the lead up to Christmas and hotel rooms were not going to be an option for us and I much prefer private apartments for their space, vibe and kitchen.  You can get a real feel for a city if you are living like a local.  For NEW YORK CITY my list of requirements were: a bed for everyone (not on a pull out sofa), kitchen, not too many flights of stairs, quiet area (not above a pub/bar) and within 5min walk of a subway station.  Well it took a while but I found this place.  New York city has changed the laws on renting places for a short stay (less than 30days) this hasn’t seemed to stop all the VRBO or Airbnb places operating.  We paid a very small deposit and the rest in cash on arrival which may be the way the landlords are getting around the situation, no paper trail.  The apartment was absolutely perfect and I would stay there again in a flash.

The Subway system is amazing, safe and so convenient.  We did a lot of walking and loved seeing the city that way but the trains were efficient and we used them many times to get from one side of the city to the other.  We had a metro card that we added money to and then swiped this each trip.

My list was very long for NY and I knew we would never get to see it all but we gave it a pretty good go.  We completed the following in 6 days and we didn’t even touch the surface of NYC and we will be back…..

We landed at JFK in our summer aeroplane clothes.  As planned we put on all our winter layers ready to leave the airport.  As we were organising ourselves a driver of a private car approached us and asked us if we needed a ride.  I hadn’t pre-booked anything, as it was too complicated and I hadn’t read about anything reliable.  Hopping into a strangers car in NYC what could go wrong, he had a badge on that means it’s ok right?!  My gut said go for it, there was nothing saying to me ‘not a great idea’.  We were just in the right place at the right time.  The price was good, the guy was nice, the car was great.  We were off to a good start.  This trip cost us $65 from JFK to the door of our apartment.  Our room was ready at 11am instead of the organised 3pm (another advantage of private apartments – flexible check-ins).

We all had a nap for a few hours which always seems to work for our jet lag.  Nap on arrival then out of the house for walks, food and adventures.

We headed for a walk for a snack first, food fixing all tiredness.  Polly got a rainbow bagel then we kept going to Gray’s Papaya – the famous hot dog stand which has featured in movies and TV shows.  We then walked through Central Park, chasing squirrels, it was cold in the park.  We headed to FAO Swartz toy shop, the kids went on the big piano from the movie Big. 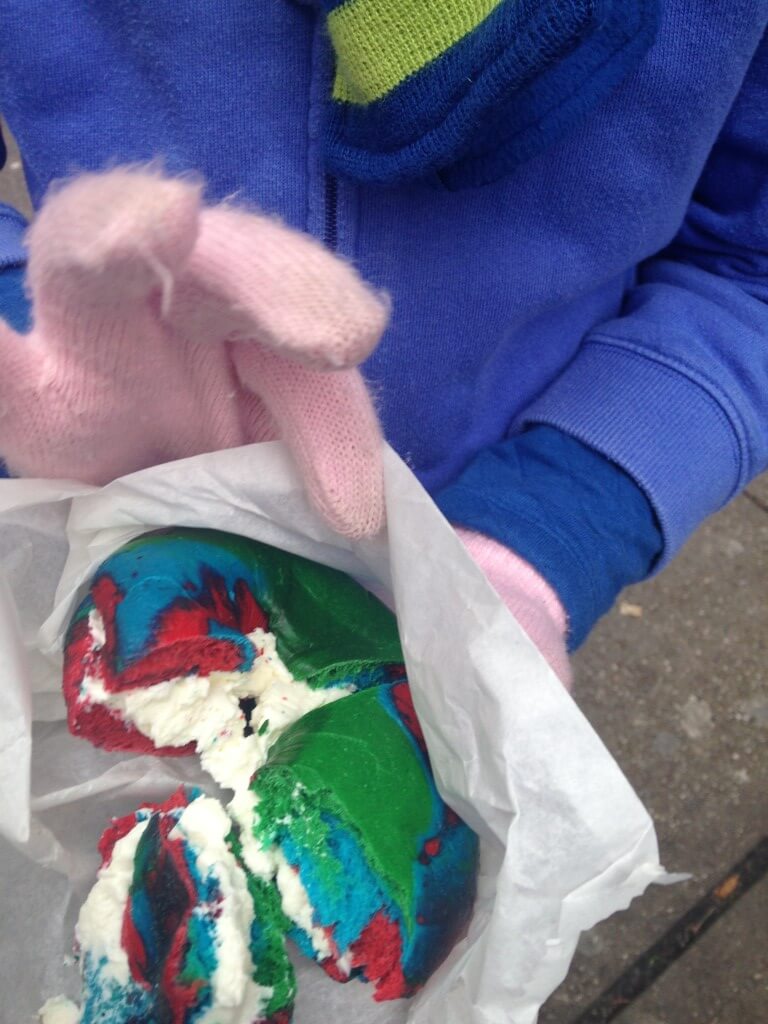 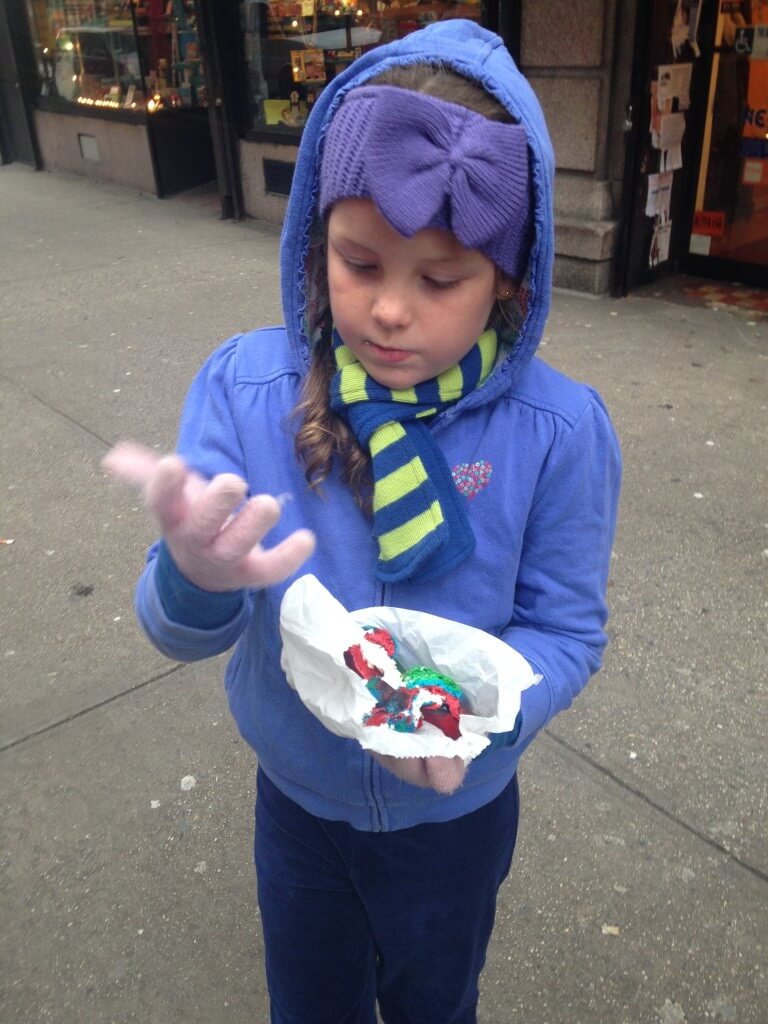 Next was the famous Christmas windows along 5th Ave.  A sample of Lindt balls from the chocolate shop gave the kids an energy burst. Along with a hot chocolate.  We headed back home in a cab.  Our dinner was Chinese food from the takeaway next to the apartment and we all crashed at 8pm. 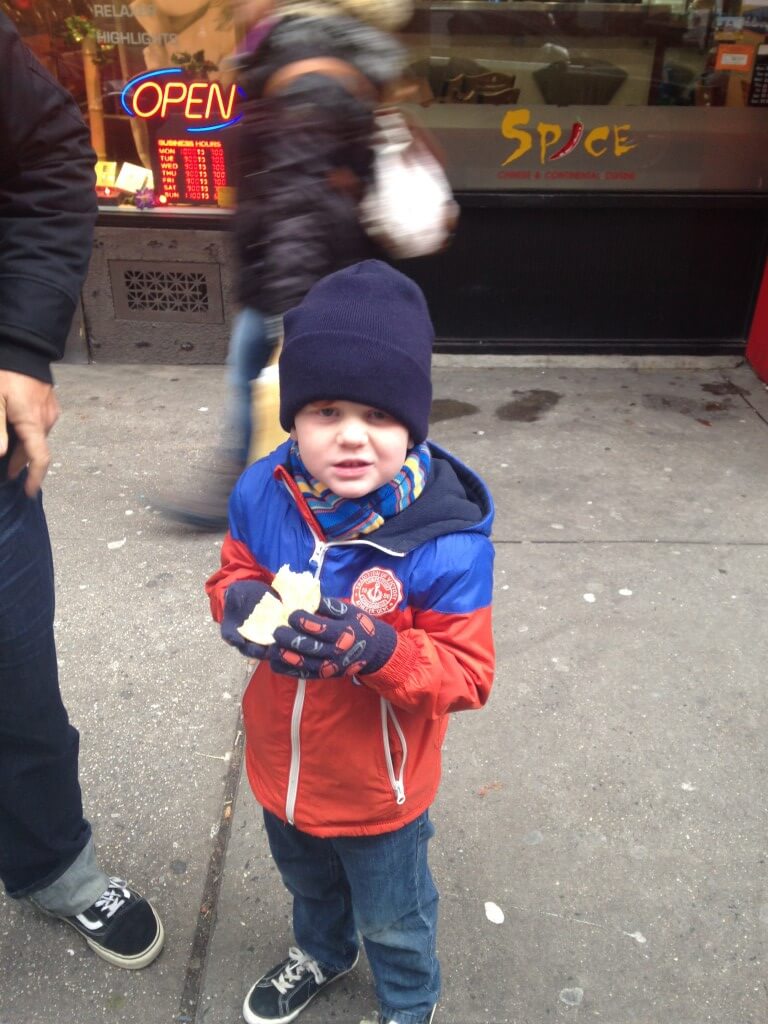 How to get over jet lag with 3 small children? Walk NYC for 12hours without returning home and only sit down on public transport!!!!

We left headed to the American Natural History Museum as our first stop. This museum is the basis for the Night in the Museum movie.  Tickets are $27 each but I had read that this is only a suggestion.  At the ticket window I requested that our ticket price will be $2 each.  The ticket lady didn’t bat an eyelid at this and I feel I could of said a penny each. The kids really enjoyed it here, we saw dinosaurs, a blue whale, skeletons, artifacts and lots of taxidermy animals.  We left after 2 hours and headed for lunch.  Shake Shack  was just near the museum and filled the gap with its delicious burgers and a peanut butter thick shake. 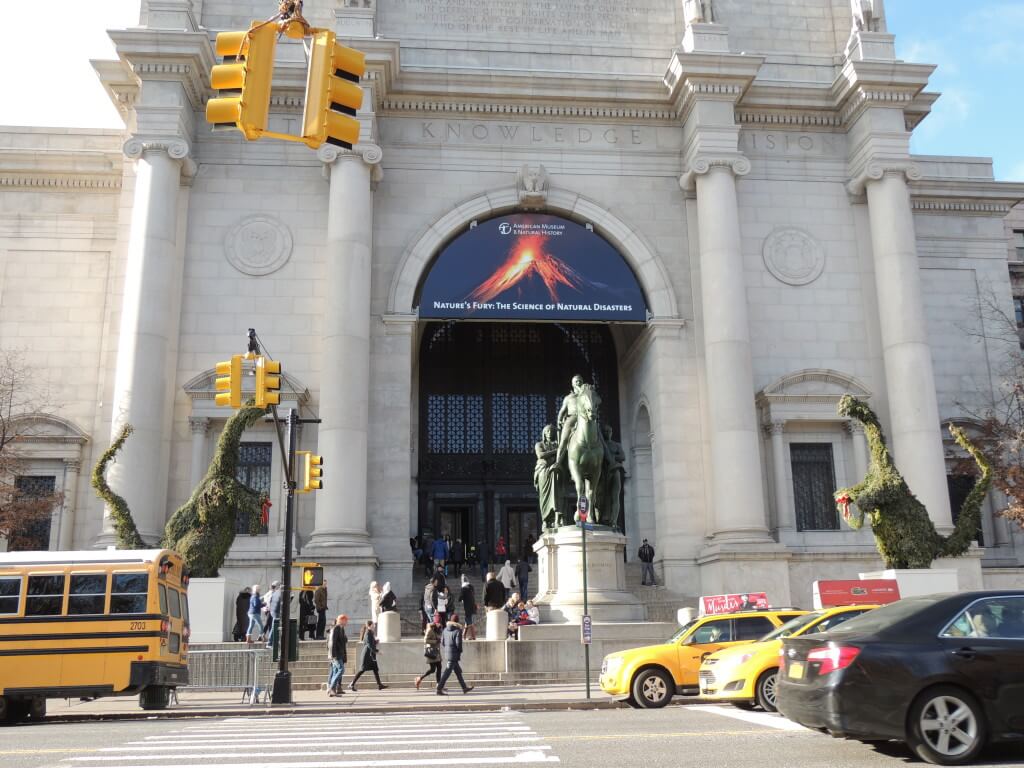 We then hopped on the Subway to the Staten Island ferry.  This ferry is free and gives you a wonderful view of the Statue of Liberty.  We watched the sun setting over NYC which was wonderful to see.  Once at Staten Island we hopped off the ferry and got straight back on and returned.  All for free. 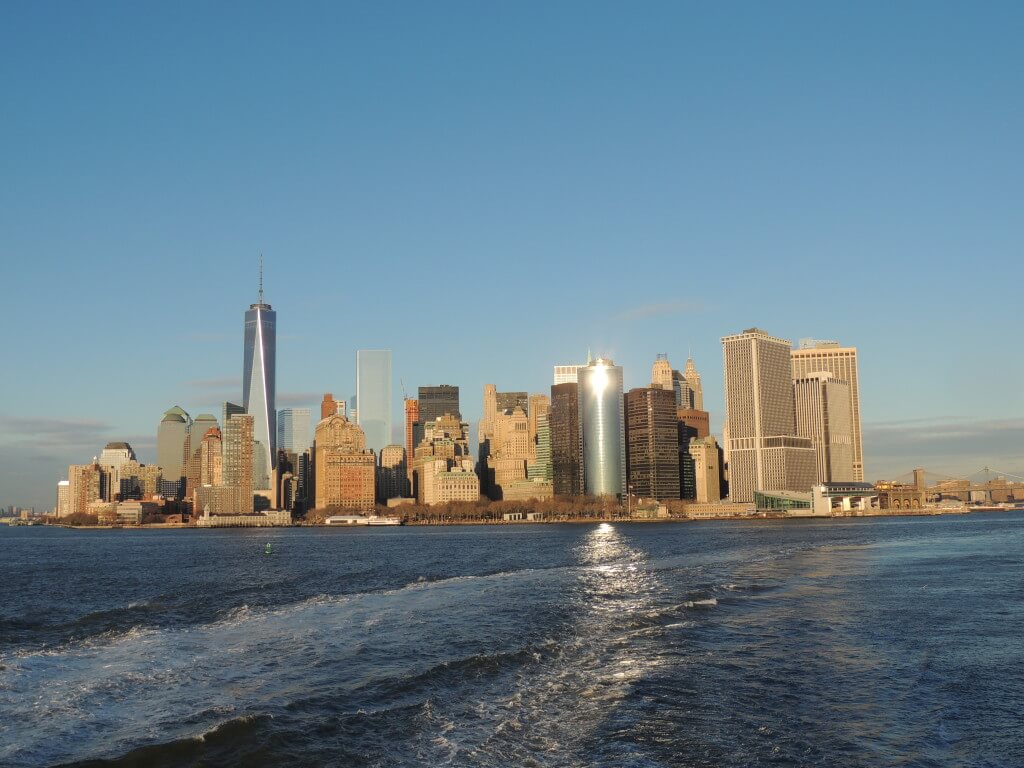 The view from the free ferry 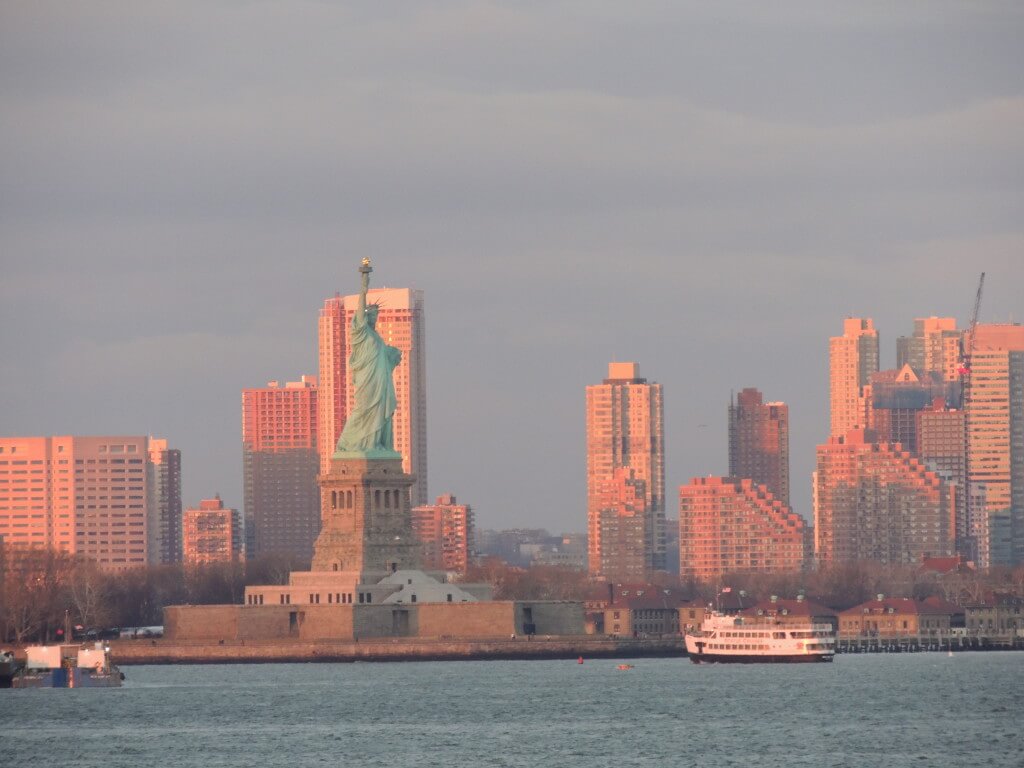 Beautiful sun set over the city 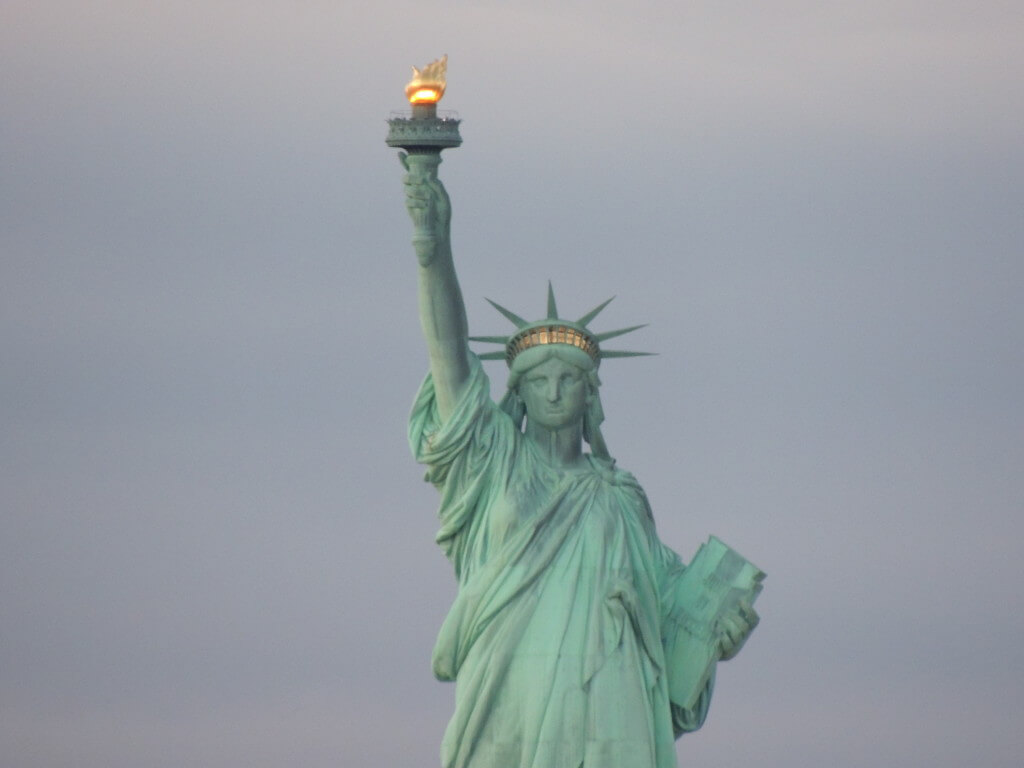 We headed back up to 33rd Street to look at the shops and wonder through the city.  Another hot chocolate to keep warm and energy levels high.  Times Square was next on the list.  The kids loves Toys ‘r’ Us and were in awe of all the toys.  Not my favourite thing to do but the kids loved it.  We headed into the busy atmosphere of Times Square and soaked up the vibe there.  After dinner at TGI Fridays we caught the subway home at 10.30pm. 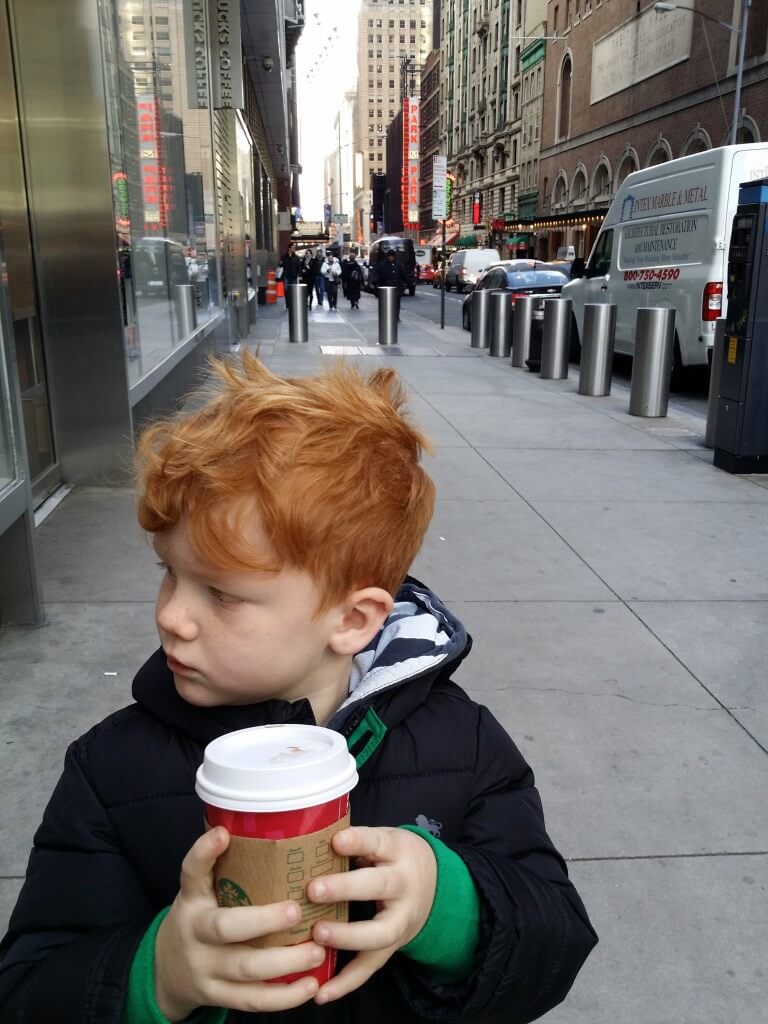 Rockefeller Centre was next to see the huge NYC Christmas tree. WOW! People ice skating below the tree.  Then to Macy’s to see their Christmas window stories and Santa.  Santa was a three hour wait so we decided to return later. A walk through the city soaking up the Christmas city vibe with pretzels and hot chocolate to snack on.  We headed to the Brooklyn Bridge using the subway.  What a marvellous piece of architecture.  We walked some of the bridge before it got too cold. 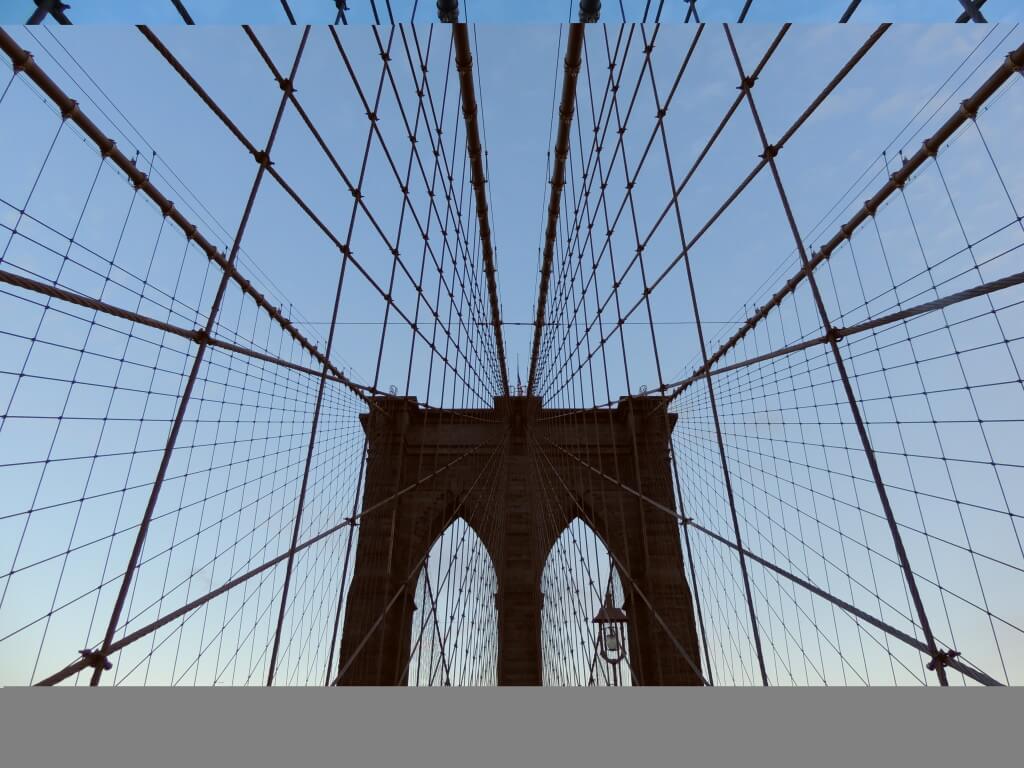 Beautiful architecture of the Brooklyn Bridge 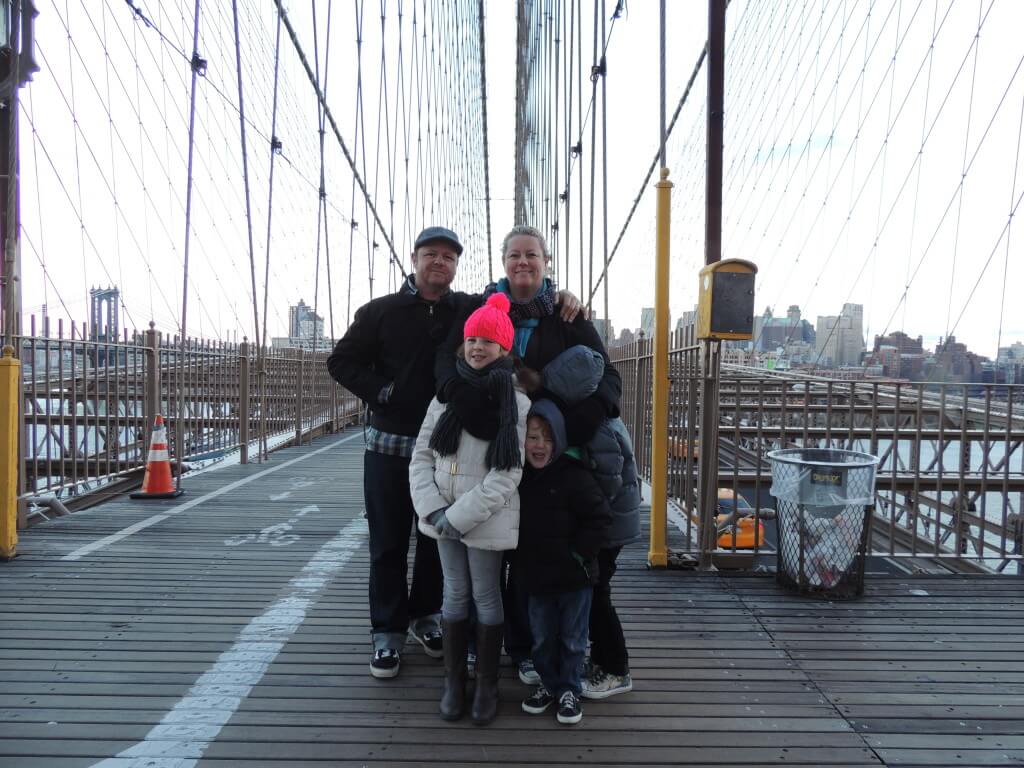 Dinner was pizzas in a little Italian pizza shop with massive pizzas. Before returning to see Santa.  The wait was 2 hours so we decided yes we would wait.  Lots of games of Heads Up in the queue and meeting and chatting to others the time passed quickly.  The wait is a meander through a Santa’s grotto.  Amazing and then the Santa was so realistic and gave us all the time we needed.  We used our own phones for photos and the kids got a little badge to say they sat on his knee.  Bucket list item completed. 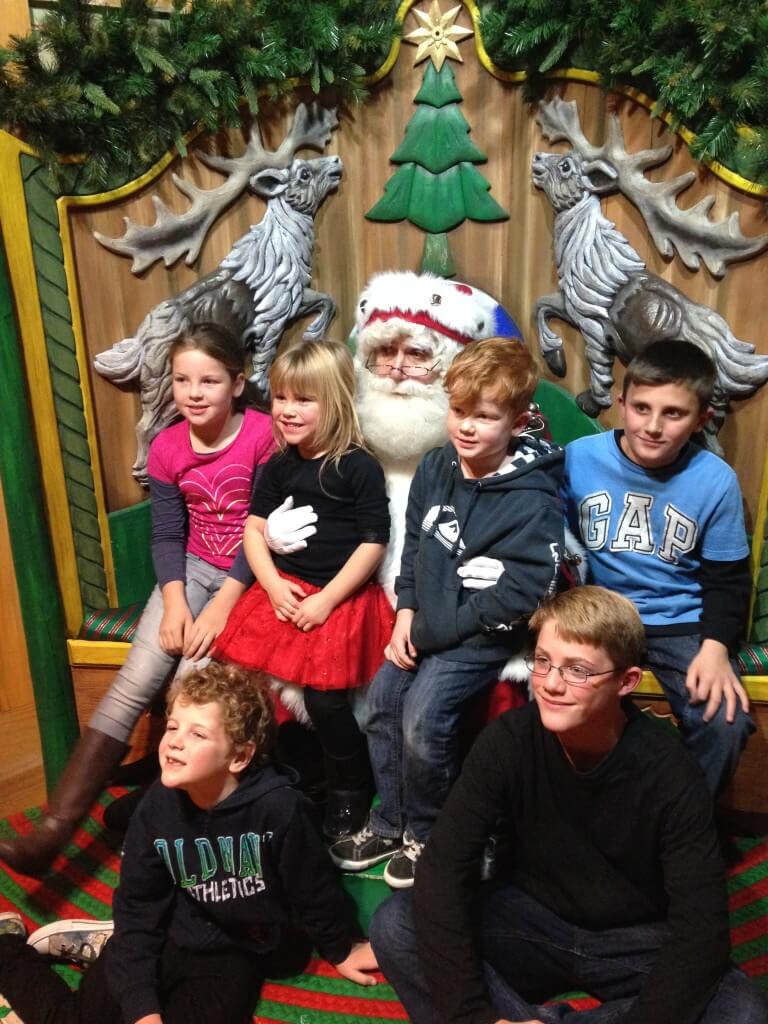 Santa at Macy’s well worth the wait

Ben and Jerry’s in Times Square for dessert – it’s never too cold for ice-cream.  Before heading home to crash.

A huge bucket list item today was the Rockettes at Radio city.  This is a huge tradition for New Yorkers and we didn’t feel like tourists at all.  A 90min show of dancing, Christmas cheer and Santa.

We then had lunch at the Olive Garden in Times Square.  We had heard about the Olive Garden on sitcoms and always in a negative way.  This was the best meal we have ever had.  We were with friends, the atmosphere was jovial and the food sensational.  Perfection.  The meals were huge and we had a ‘to go’ bag that fed us for dinner that night.

We walked off the bread and pasta and headed into Central Park for a play on the playground equipment. 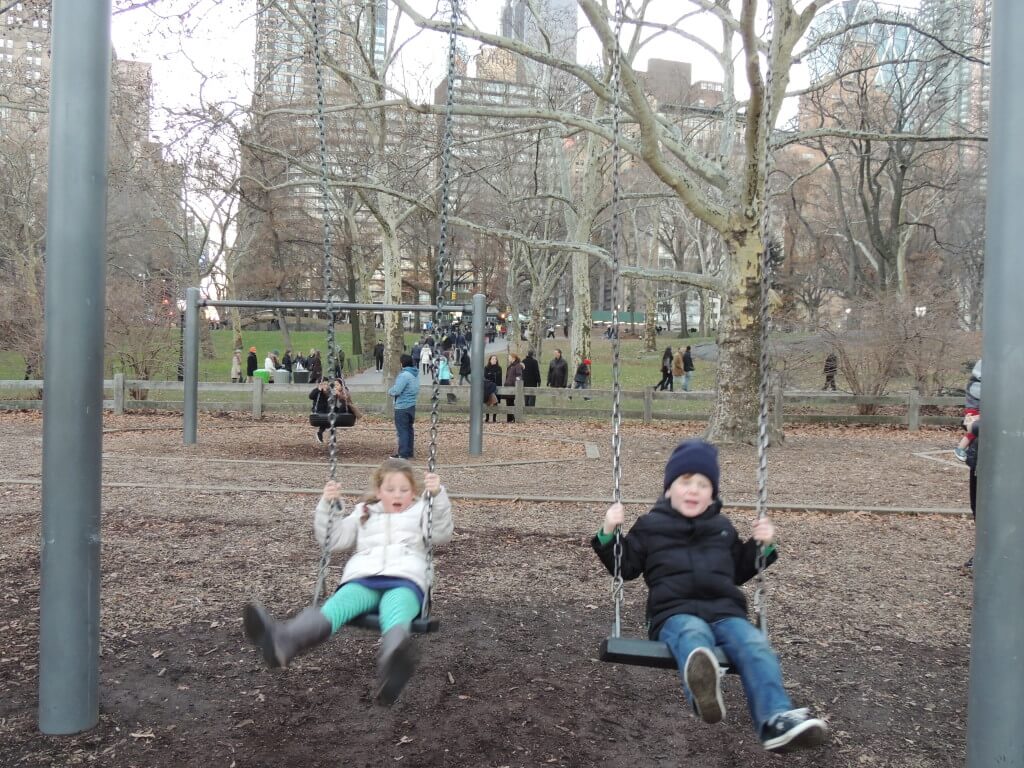 We had loose plans today and was hoping that NYC would lead the way.   We started with a donut from Dough which is a donut shop I found on Instagram. Then first on the list was the Flat Iron Building which looked amazing just like the canvas we have on our wall at home.  There is a Lego Store right next door to the FlatIron building which the kids loved. 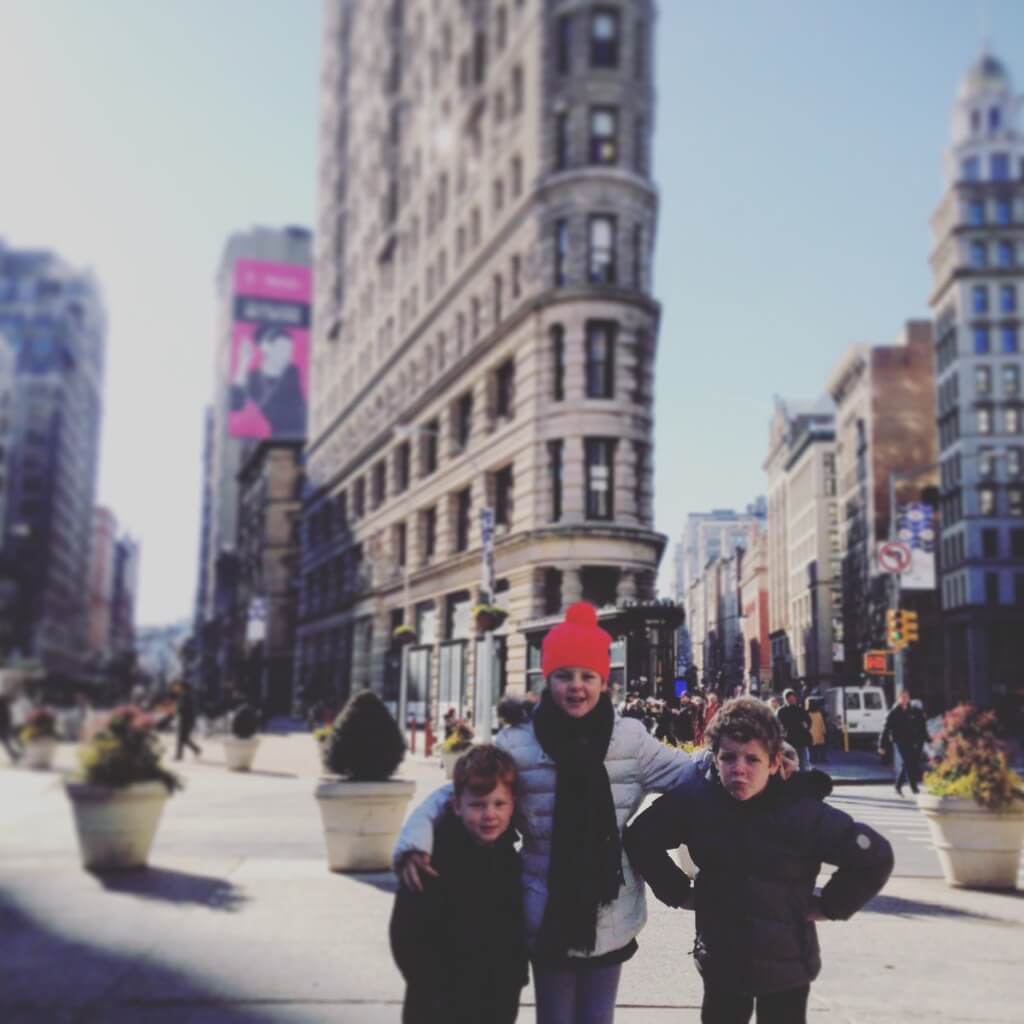 Next on our list was Generation Records which was in Greenwich.  This was on Billy’s must do list.  We left him to it, I used Google Maps to find a park for the kids and I to be free in.  We were really close to Washington Square which is a large open space.  The kids and I sat and people watched and they went for a short wonder and kept checking in with me.  Lots of squirrel sightings!  We were now in Greenwich was is where ‘Friends’ is set.  We were looking for a quaint NYC village type coffee shop.  We really hit the spot with a mom and pop café with soup and sandwiches and big cookies.  It was just want we wanted and had a big lunch there.

We then headed to the High Line.  The High Line is a public park built on a historic freight rail line elevated above the streets on Manhattan’s West Side. It runs from Gansevoort Street in the Meatpacking District to West 34th Street, between 10th and 12th Avenues.  A beautiful space for the kids to be a little freer and look and touch grass and garden space. 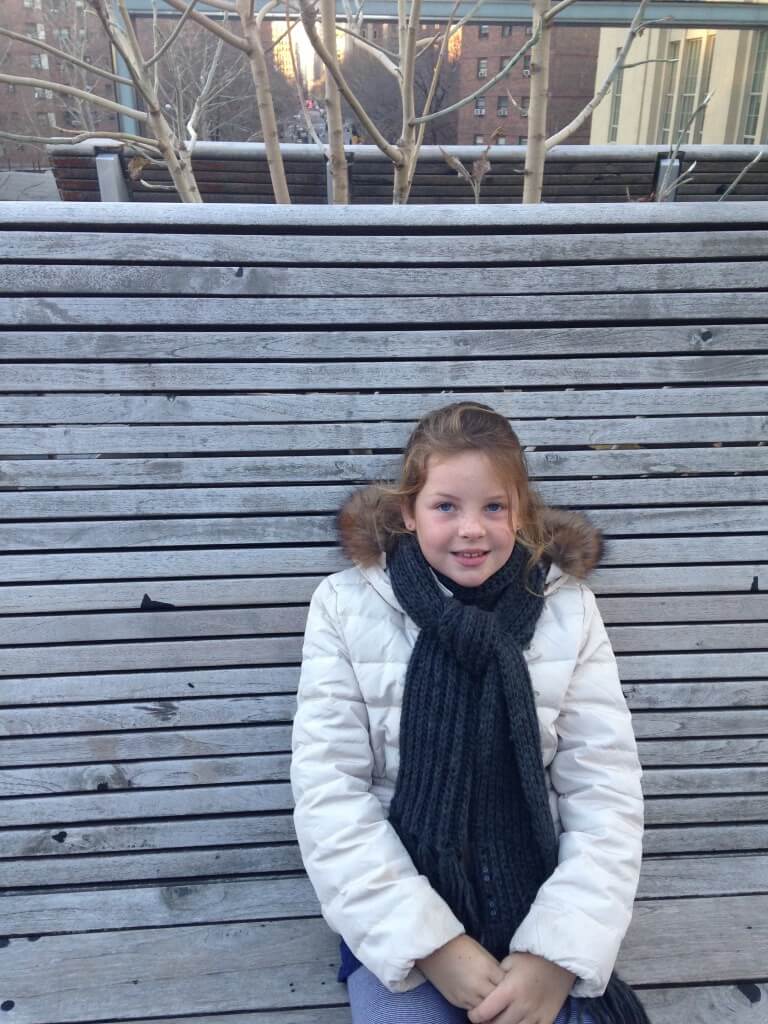 Polly chillin’ on the High Line

Our plans then led us to the Times Square area, walking past the Empire State building all lit up once the sun started setting.  We promised another visit to Toys ‘r’ Us but once we sat down and refuelled on cake and hot chocolate Billy decided that it was Tattoo Time.  This led us to the Lower East Side at New York Hardcore Tattoos.  (More about Billy’s tattoo souvenir collection in later blogs).  Tattoo parlours aren’t really kids friendly and it isn’t exciting so I took the kids for a walk.  We stumbled across a huge discount lolly shop.  What a find! 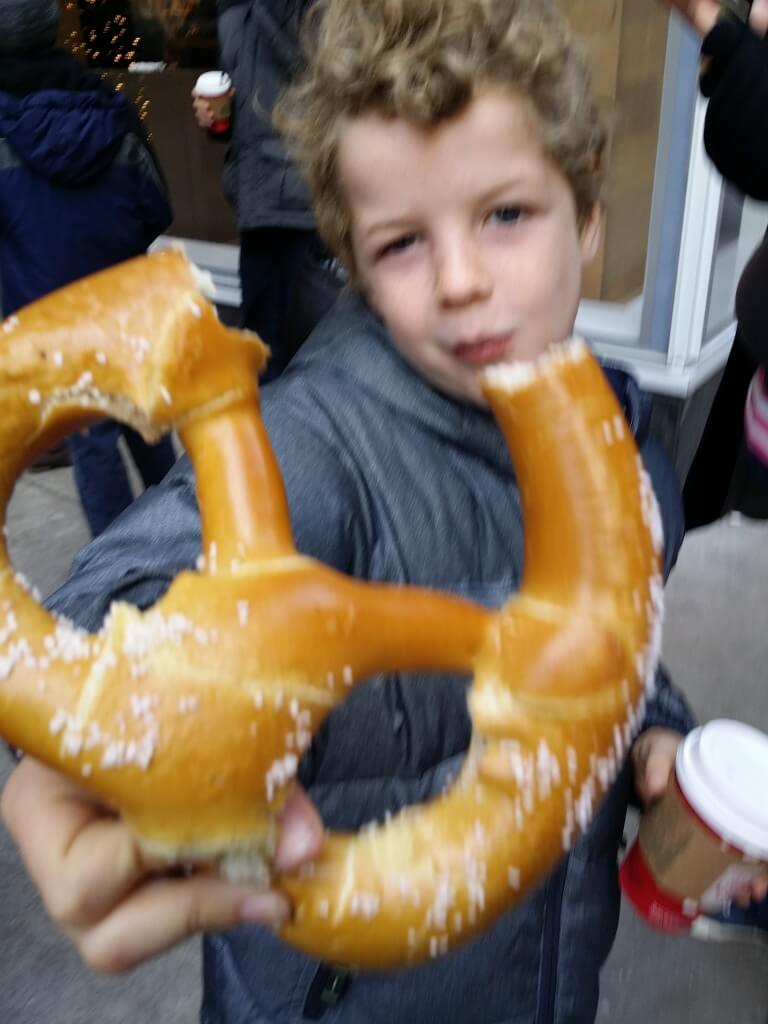 A few $1 pizza slices ready for the walk back to the subway didn’t fill Cooper up enough and he hit a wall.  Easiest thing to do was to hail and cab and a promise of Toys ‘R’ Us.  We also hit M&M World, the Yankees Store and Disney Store.  Not as authentic NYC as I had dreamed of but we need to cater for all family members!

Once the kids were in bed for the night I headed out for a walk alone.  I felt safe and enjoyed the alone time.  My aim was to see Café Lalo which is from the movie ‘You have Mail’ with Tom Hanks and Meg Ryan.

Our final day in NYC.  We headed to a luggage storage facility near Times Square as check out was at 11am and we didn’t need our luggage holding us back.  We visited Grand Central Station – stunning!  After a typical NYC café – 14 sandwich makers – we visited NYC library which had the most magnificent Christmas tree and marble columns and amazing architecture. 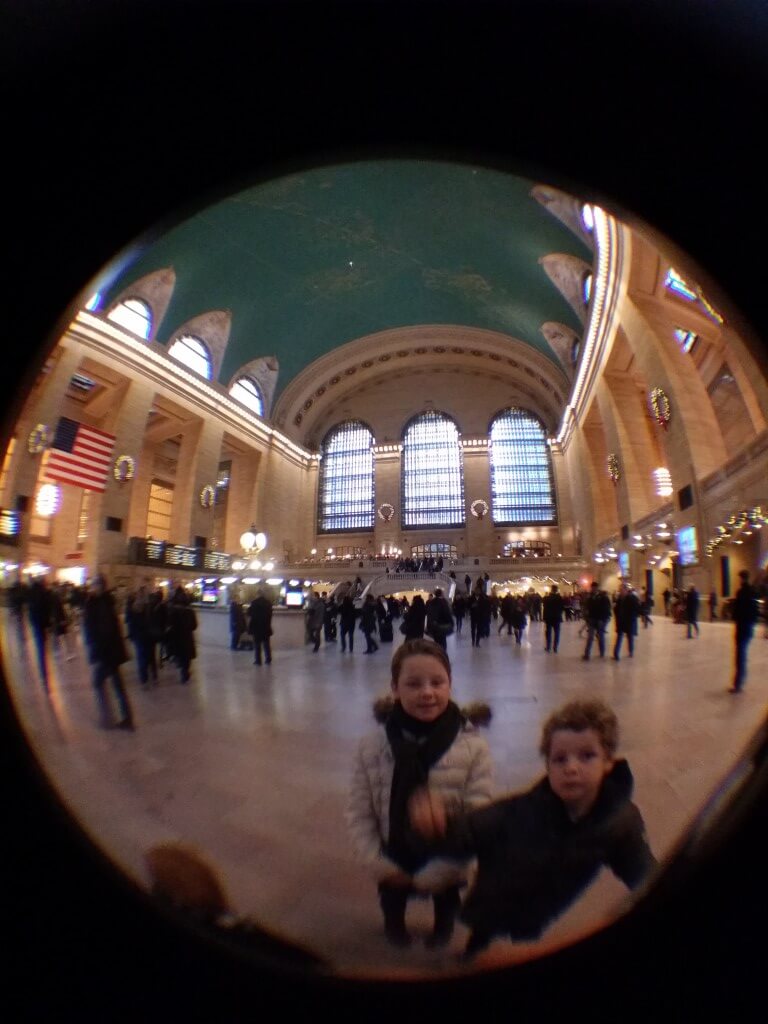 Since we had previously gone up Empire State building we didn’t on this trip but we hadn’t been up to the Top of the Rock. We ran out of time on this trip as we then had a ferry to catch to meet up with some friends.  So much more to see in NYC we didn’t scratch the surface.

IF WE HAD MORE TIME….

Also on our list but we just didn’t make it—->