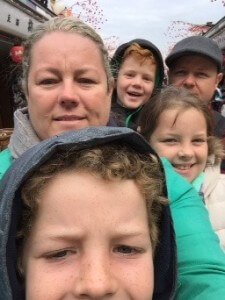 We visited Tokyo in December which was perfect cool weather.  I had never had Tokyo on my radar but cheap flights appeared with Jetstar and I thought why not?!

Since we were only going for a week we decided that spending the time in Tokyo only would be mean we saw a lot of the city, we weren’t rushed and we didn’t lose time travelling to different parts of the country.

Tokyo opened the kids’ eyes to a different world and it was a huge culture shock.  Before we left for Japan we looked at books from the library, searched places on the internet together and went to a few different Japanese restaurants so they knew what type of experiences to expect. 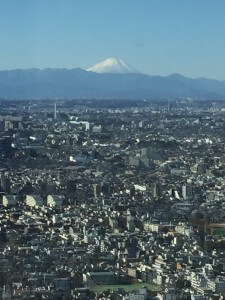 Before I head to a new city I spend many hours researching on things to do – both typical tourist musts and the quirky things.  I find most of my information on other travellers’ blogs and Pinterest. I start building Pinterest boards for each city.  I have a complete plan of what could be done in a day for each day of the trip.  We never get to complete the list as it is usually jam-packed.  I like to have a plan that is flexible and if our plans change things don’t fall apart.  Vistacity is an amazing App that can plan your whole trip.

HOW TO SURVIVE IN TOKYO AND FALL IN LOVE

WITH THIS AMAZING CITY

There is no central part of Tokyo itself but instead lots of little areas that are all places to see in their own right.  My requirements for the apartment in Tokyo were as follows:

We stayed in this apartment in Roppongi.  It was absolutely perfect and I would return there in an instance.  It was on Airbnb and was reviewed positively by all that stayed.

The portable Wi-Fi was a must to be connect to the internet while out.  Billy decided to pre-order a sim card from econnect Japan. The sim card was collected at the airport or can be delivered to your hotel.  This meant we could call each other via Facebook messenger (there is a call button).

How we were going to get from Narita Airport to our accommodation was the biggest stress for me, I had read many different options and I still hadn’t decided on landing. Our Airbnb hosts had given us three choices. Two involved changing trains, buying different tickets and carrying 4 bags at 9pm after an 8 hour flight.  The 3rd option and the one we chose was catching the limousine bus (not as fancy as it sounds) to the Hilton Hotel which was then a 7min walk to the Airbnb place.  The bus cost $100 for the family but it was the quickest and easiest.  The ride from Narita into Tokyo is well over an hour on any form of transport.

This was a fun challenge and mush easier than I imagined.  With smiles as our currency and the Japanese being the most helpful and polite race I have ever come across, the language barrier was not an issue.

I downloaded Google Translator onto my phone from the App Store.  This allowed me to take photos of sign, posters or menus and they were then translated to English. 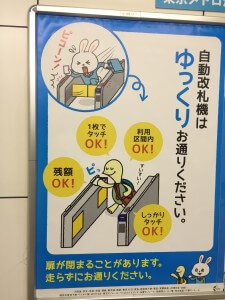 The Japanese have little interest or need in learning English and there is not many people who speak English.  Not once did we encounter any trouble but we were relaxed and had fun with lots of sign language and cute children who got us through.  The Japanese loved the kids.

I had researched about buying a pre-paid train travel top up card (either PASMO or SUICA) for the Tokyo train system.  I was prepared to pay for this tap and go card but then we decided on a METRO ALL DAY travel pass.  This cost 600 yen for adults (about $8) and 300 yen for the children, Tommy was free under 6.  This was easy to buy at the self serve ticket machines as there is an English option.  It was the cheapest way to get around and we covered a lot of the city with our day pass.  The most important app was the Tokyo Metro Subway Map and Route Planner.  This would tell us which train to catch, where to change and how long it would take.  The maps are near impossible to read, this App was a MUST. 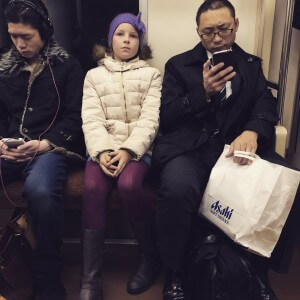 Polly fitting right in on the Metro train system 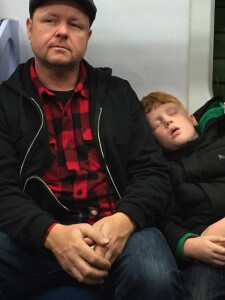 The FOOD and COFFEE IN CANS

OMG!!!! Such an unexpected highlight of our trip.  Every single meal was divine, we ate in street stalls, 7-11 for snacks (hot and cold), noodle bars, coffee shops, Korean BBQ joints and tiny 8 seater restaurants. Such a yummy experience.  Ordering was easy and fun.  Some places had vending machines to select the meal which then gave you a ticket to give to the chef.  Other places had speciality meals so the choice was between two dishes so it made the choice easy.  We had ramen, rice dishes, skewers, bakery items, self bbq and even pizza.  Sushi wasn’t like it is here in Australia and we didn’t find any sushi bars to try. 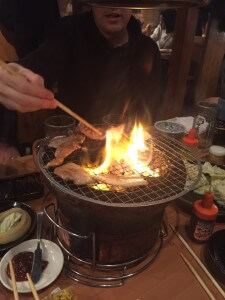 Cooking at our table at the Korean BBQ

My kids aren’t adventurous eaters but they gave everything a go as the food wasn’t spicy and after a bite or two they were hooked.  They even managed to master?! chopsticks. 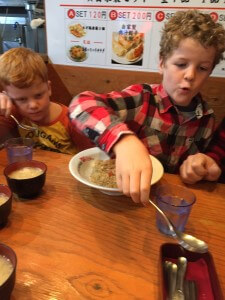 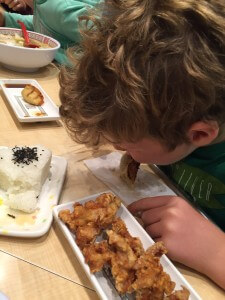 Coop loves all the dumplings 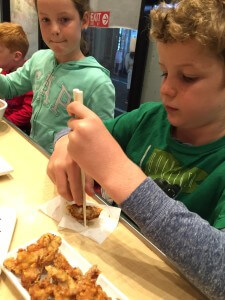 There are lots of vending machines selling drinks.  They are everywhere.  Billy and I would have our morning hot coffee from a vending machine which w.  They cost about 100yen.  Not bad for a caffeine fix. 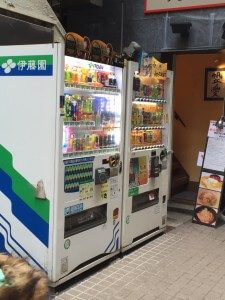 lots of drink options in the hundreds of vending machines

NOTE: The Japanese don’t eat while walking the streets.  When buying a delicious snack from a 7-11 (they are seriously yummy) stand off the footpath and eat your snacks, don’t eat and walk.

Quirky and bizarre stuff was on the list of things to buy in Tokyo.  We went to Daiso where everything is 100yen.  Lots of cute stationary items, iPhone accessories, bento boxes and strange odds and ends.  A fun place to shop.  Tokyu Hands was another place with 8 storeys or Japanese quirky items.  A lovely place to wonder around.  Itoya is an 11 storey stationery store which needs to be seen to be believed.  Beautiful pens, paper and cards.  Kappabashi Street is the place to shop for all pottery, crockery, cooking items and amazing knives.

The fish markets are a must for your visit to Tokyo.  We didn’t go to the 5.30am tuna auctions but instead headed to the markets at 10am.  There was still lots of action as the markets were coming to an end for the day.  It wasn’t busy and we were able to wonder through the stalls and look at the strange offerings from under the sea.  The kids loved looking at all the weird fish, turtles and unknown creatures.  The fish mongers were scaling fish and selling their stock.  The food stalls on the outside of the markets sold the most beautiful snacks and wonderful knives and fish scaling items. 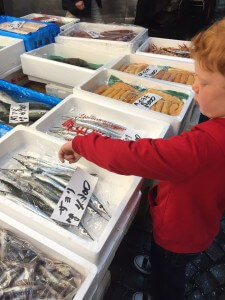 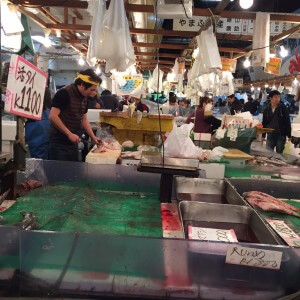 fish markets at pack up time 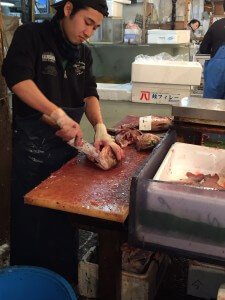 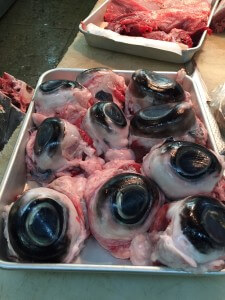 We visited the Senso-ji temple in Asakusa.  There is an enormous red lantern at the entrance to the temple, this then leads into traditional markets selling many items such as incense,  offerings for the Gods and clothing.  We browsed but didn’t purchase.  The temple itself had many Japanese visitors praying and following traditions.  We joined in as best we could.  There was a fortune telling area where you paid a small amount to shake a wooden barrel which gave you a special number, this correlated to a drawer which held your fortune.  The larger piece of paper with the fortune was then folded and put on a large rack.  We then walked to a large incense burning barrel where you wafted the smoke fumes towards your face to get all the good luck.  We walked up to the temple to look at the prayer session.  A wonderful cultural experience. 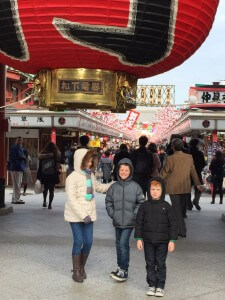 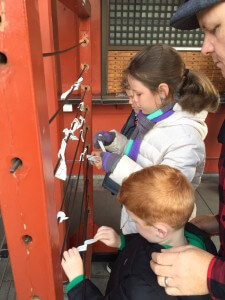 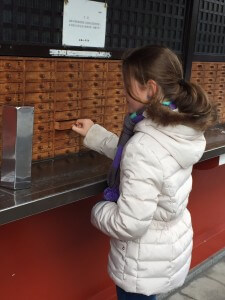 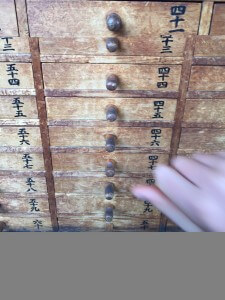 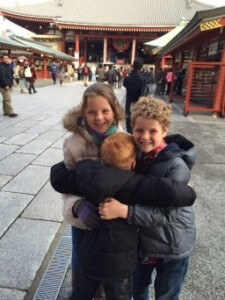 5 Replies to “Family Guide – Our Tips for Tokyo”