Universal Studios Orlando – How to have a wonderful time with your family and get the most out of the experience.

Here are our tips and tricks on how to have a fantastic time and experience as much as possible at Universal Studios.  We spent two full days in the two parks.  This was enough time to see and do as much as we wanted. 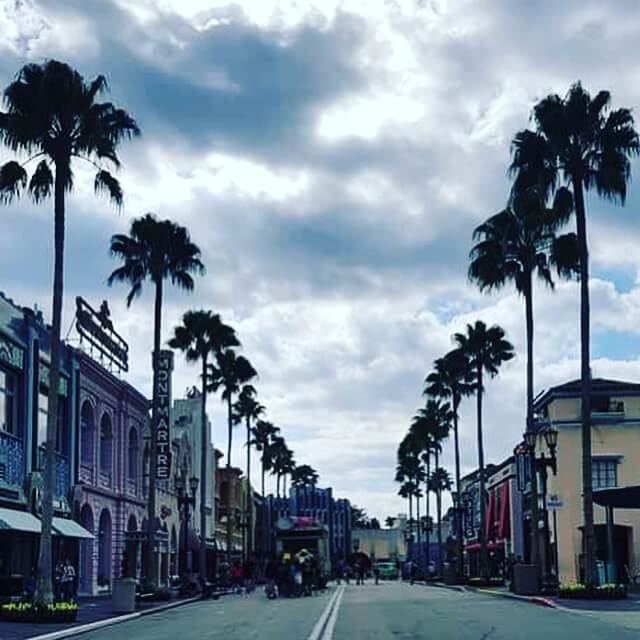 There are many factors that you need to consider when selecting your accommodation.  You will be able to find many places to stay off site that are close to the Universal Studios but they don’t offer one important thing – an UNLIMITED EXPRESS PASS and EARLY MORNING ENTRY.  There are three Universal hotels that are within walking distance to the Parks that offer EARLY ENTRY and EXPRESS PASSES.  These two features will make your experience at Universal all the more worthwhile.

We stayed at Loews Royal Pacific Resort which is the cheapest hotel that offers the EXPRESS PASS and EARLY ENTRY.  We found the hotel wonderful and the staff amazing.  The fantastic pool area was appreciated on the day we checked in and the morning we checked out.  The rooms were spacious and the bathroom a great size for the 5 of us.  Tommy arrived on his birthday and the hotel had a balloon bouquet for him which made his day.  We were given a rollaway bed for third child.  The room we were in was a standard room and we had plenty of room with the two queen beds and the rollaway bed.  There was a fridge in the room which was great for drinks and snacks.

UNLIMITED EXPRESS PASS each guest staying at selected Universal Hotels have the UNLIMITED EXPRESS PASS included.  This is an essential pass so that you can make the most of the parks and the most of your day.  They can be purchased for $89 per day per person for those who choose to stay at different accommodation.  The UNLIMITED EXPRESS PASS will allow you to skip the lines at all the rides (a handful of rides and the Hogwart’s Express train don’t have an Express Pass option).  This saved many many hours as it reduced our waiting time to approximately 10-20mins for each ride.  It would be a very long day to be at Universal without this pass.  We were able to skip hours and hours of waiting with the pass and go on all the rides over our two days.

There are a few different ticket prices and choices.  It is cheaper to purchase online rather than at the gate.  We found a few different offers online but we prefer to purchase from Universal itself.  If you are wanting to catch the Hogwart’s Train it is important that you have admission to both parks on the one day.  So purchase the park-to-park to experience the Hogwarts Express train.

There are two Harry Potter World’s at Universal Orlando.  With Hogsmead inside the Island of Adventure and Diagon Alley in Universal Studios.  The Hogwarts Express is the realistic train trip between both parks.  The train is an experience in itself, with interactive windows, which are different according to the direction you take the train.  So ride the train in both directions.  The train can get busy but the loading time is quick.  You cannot you an Express Pass on the Hogwart’s Express Train.

The attention to detail within both Harry Potter Worlds is simply brilliant.  You will feel like you are on the movie set.  The rides are lots of fun and the shopping here is an experience in itself.  The windows are interactive and the windows are the place to use your wand.  So many people are dressed in robes and carry their wands.  The food is also a wonderful experience and ButterBeer ice cream is delicious.  We had a few serves each day!! So yummy. 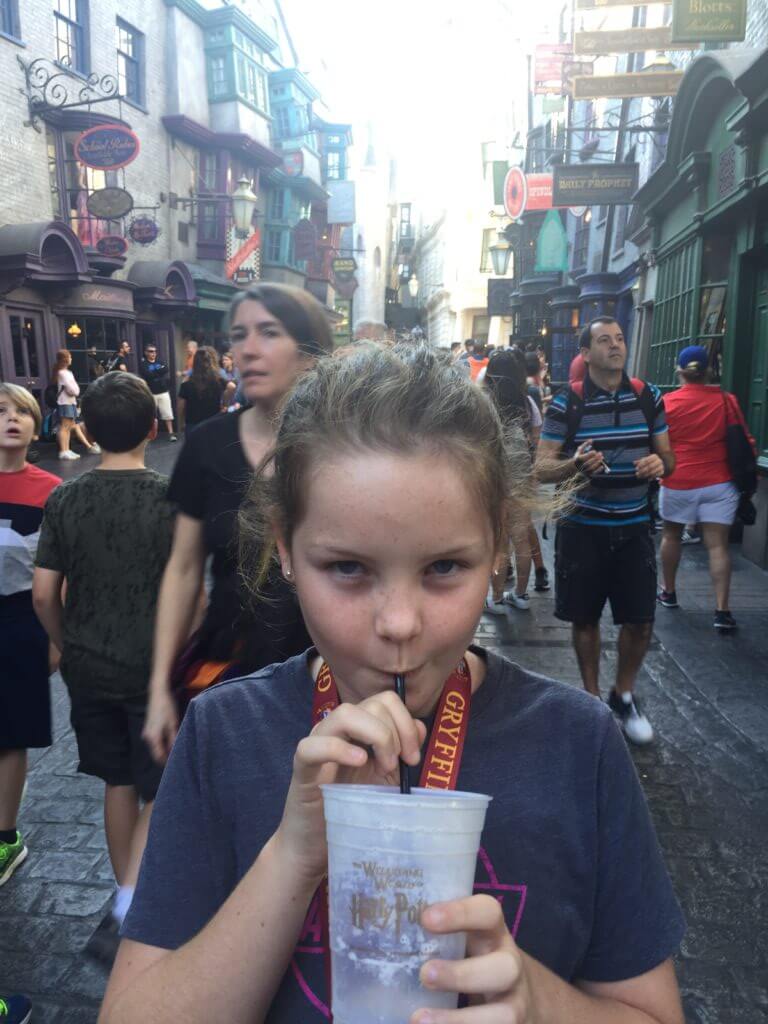 With a husband that is a huge Simpson fan this was as high on his list as HP World was for Polly.  We had a great time in Springfield with the Simpson Ride being a firm favourite.  We went on this ride a few times.  The huge donuts were another favourite.  Billy enjoyed a beer at Moe’s tavern and we ate lunch in Krusty Burgers (not the best meal we have had).  There were plenty of photo opportunities with the Simpson family who came out to visit many times. 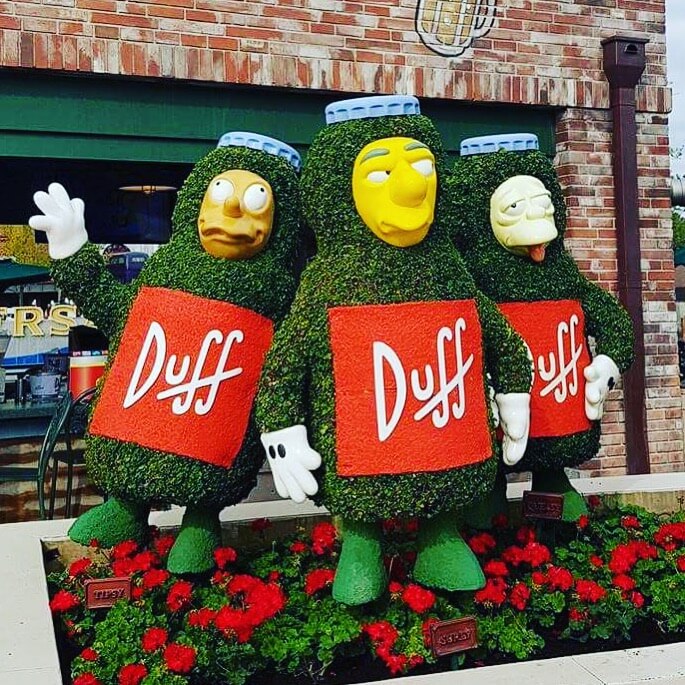 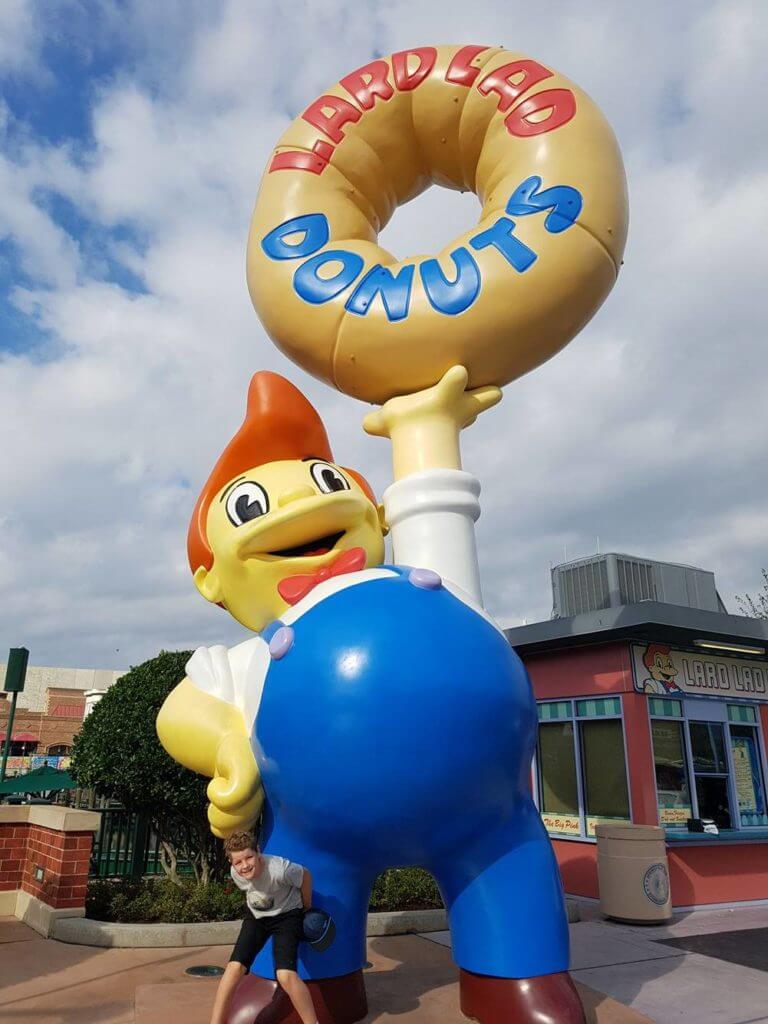 Grab a huge donut – they are delcious

There are lots of simulator rides and 3D experiences at Universal Studios but the kids’ favourites are always the rollercoasters.  There were a few favourite rides with the kids the number one being Hollywood Rip Ride Rockit.  This extremely steep rollercoaster allows each rider to choose the music they will listen to on the ride.  The other major rollercoaster the kids loved was the Hulk Rollercoaster.  It was so fast yet so smooth.  We went on quite a few times.

Other Tips for Families

Disclaimer: We were guests of the Universal Studios Parks.  All our opinions are honest and our own.  We were paying guests at the Loews Hotel.

3 Replies to “Universal Studios Orlando – Our How to Guide”